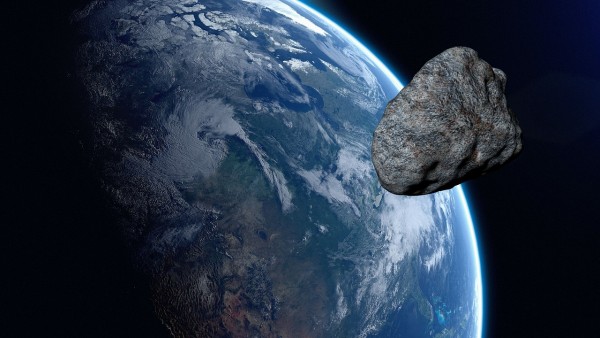 A massive asteroid described as a ‘planet killer’ has been spotted lurking in the inner Solar System – and it could one day hit Earth, scientists warn.

Nearly a mile in diameter (1.5km), the asteroid, called 2022 AP7, has an orbit that crosses the orbit of Earth and is described as ‘potentially hazardous’.

It’s one of three near-Earth asteroids (NEAs) found in the inner Solar System, hiding in the glare of the sun, although the other two are smaller.

The rocky trio were discovered using the Dark Energy Camera at the Cerro Tololo Inter-American Observatory in Coquimbo, northern Chile.

Because they’re hiding in the inner Solar System, the region within the orbits of Earth and Venus, researchers had to contend with the glare of the sun to find them.

By taking advantage of the brief observing conditions during twilight, the astronomers were able to find the ‘elusive trio’.

‘Our twilight survey is scouring the area within the orbits of Earth and Venus for asteroids,’ said Scott S. Sheppard, an astronomer at the Earth and Planets Laboratory of the Carnegie Institution for Science.

‘So far we have found two large near-Earth asteroids that are about 1 kilometer across, a size that we call planet killers.

‘There are likely only a few NEAs with similar sizes left to find, and these large undiscovered asteroids likely have orbits that keep them interior to the orbits of Earth and Venus most of the time.

‘Only about 25 asteroids with orbits completely within Earth’s orbit have been discovered to date because of the difficulty of observing near the glare of the sun.’